Any University of London LLB student that has had the time and good fortune to get their head/s around (what was historically a core text for our First Year CLRI studies) Gearey et al.’s The Politics of The Common Law will be left in doubt that the law is inherently political and politics/politicians can somehow never escape the watchful eye of the Rule of Law.

Students or #fledglinglawyers that have never quite been able to grasp this as a concrete/pragmatic notion could do far worse than read Nick Davies account of the very recently concluded “trial of the century”:

Brave investigative journalism aside (Davies is also author of Flat Earth News); it throws a very bright and erudite light on the often unexplored tension that exists between politics and the media and by default the legal system and the media. I won’t attempt to paraphrase, as it is a piece that deserves to be read and relished in its entirety; not the least for the Rolls Royce defence team analogue, the description of Timothy Langdale QC as “a model of old-school courtesy built around a core of steel” but ultimately for this paragraph in which he documents the slow unravelling of prosecution witness Eimar Cook:

“Cook told the jury she recalled a conversation at lunch in September 2005, when Brooks had not only warned her that her own phone might be hacked but had described the ease with which it could be done. Cook added that during the same lunch, she thought Brooks had discussed the famous incident when she had been arrested for assaulting her then partner, the actor Ross Kemp. Laidlaw gently pawed her into position, confirming without doubt the date of the lunch, challenging the strength of her memory until she insisted she was absolutely certain and then, like Hannibal Lecter in a horsehair wig, softly and courteously, he cut out her heart: the incident with Kemp had happened six weeks after the lunch. Her story could not possibly be right.” 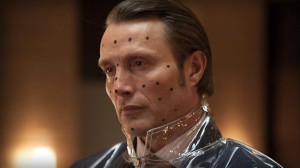 The backdrop to this story; (Murdoch’s bid to acquire BSkyB; Coulson’s involvements with Cameron (and that’s another story for another day) and Brooks’ masterful positioning of herself as an “ally to the elite”) has to be studied and ultimately digested to be believed. Indeed with its baffling yet subtle complexities but nonetheless inherent elegance it is not that dissimilar (though of equally dubious origin) to some of the exquisite meals that are served up in any episode of Bryan Fuller’s Hannibal (NBC).

Incredibly; Murdoch’s News Corp, (in spite of phone-hacking related legal bills in excess of 270 million pounds since 2011) has actually made money from this realignment/restructuring with shares up more than 1% following the verdict (see Financial Times June 24th 2014: Hacking trial: Rupert Murdoch comes out on top despite legal bills).

So whilst 25th June was a “great day for red tops” (Sun’s headline: 25th June 2014), Essex boy Andy Coulson is facing a custodial sentence & one can’t help but be left wondering whether it was a great day for British justice or not. One thing that we can’t be left doubting (as Michael White quotes in “Why it’s OK to feel sorry for Andy Coulson”) the words of the old music hall songs never seem to fade:

Compared by her (Brooks’) pre-trial lawyer to St. Sebastian; this is one blogger and #fledglinglawyer that thinks that maybe sometimes you can stretch your analogues that little bit too far.

Where now; well probably off to prison for Mr. Coulson & back to business as usual (plus the memoir royalties) for Ms. Brooks; we’ve already considered Mr. Murdoch. For myself; as a long time boxing fan I have always relished the re-match; so I am personally praying for a retrial… my choice for prosecution counsel… no doubt would  have to be (after all the appropriate training and Bar Council validation was in place) none other than Hannibal Lecter QC; at least then it might be something approaching a fair fight.

“Why it’s ok to feel sorry for Andy Coulson”: http://www.theguardian.com/uk-news/2014/jun/25/why-feel-sorry-andy-coulson