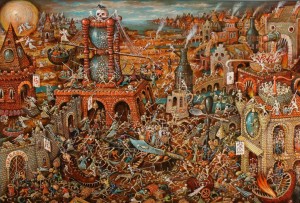 With todays’s piece I think I’m in grave danger of entering the literary minefield of mixed metaphors; as three such metaphors seem to be running through my mind simultaneously, prompted in part by my current studies of the very legally thorny subject of intent, my related reading of the recent case regarding the appearance of Allan Young this week at the Old Bailey (see reference below) and perhaps what I have learned to call (& will be duly writing a piece on) my #fledglinglawyer Magpie Mind.

So let’s see what “hell and high water”, “rock and a hard place” & “bargepoles” have to say for themselves.

Let’s start with “bargepoles”; these (and the expression “I wouldn’t touch that with a bargepole”) came into my mind as I studied the nigh on impossible situation that trial judges have found themselves in as they have attempted to direct juries (with greatly varying degrees of success it must be said) with regard to the requisite “mens rea” to establish the strict intention necessary to transform a manslaughter into a murder. From the “natural consequences” of DPP v Smith [1961], through the “high degree of probability” of Hyam [1975] to the “virtual certainty” of Nedrick [1986] & Woolin [1999] one cannot imagine how tightly the novice judge (and we tend to forget there are such) would have had to hold onto his “bench book” nor how carefully he/she would have needed to scour the 1967 legislation (Criminal Justice Act 1967) or the more recent mooted notions of codification (Law Commission 2006) to feel even half way confident to propound on said subject.

So therefore perhaps not surprisingly, we come to learn this metaphors originates from equally (if not more so) thorny ground.

“It will be a long while before any political party touches Home Rule again with the end of a barge pole.”

It concerned the very current yet highly emotive topic of devolution; whilst some 50 years earlier an obvious precedent can be found concerning social class in Official Magazine of the Grand Lodge of the United States (1843) edited by James L Ridgely:

“But that mushroom aristocracy of our country… who would not condescend to touch a poor man with a ten foot pole, were their extraction traced, in nine cases out of ten they were nurtured in the squalid huts of poverty.” 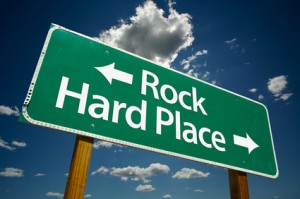 Which I hope takes us quite comfortably on to the Morton’s fork (see history of this expression below) or more colloquially, the rock and a hard place that is facing the advocates, judges and jurors that are currently gathered at the Old Bailey to consider the fate of Allan Young. In a story that is eerily reminiscent of Woolin, a much younger Young (some 13 years ago in fact), in a fit of pique shook his five week old son Michael Winn leaving him with “catastrophic” brain injuries and ultimately severe disability.

The prosecution are now alleging that his death in 2011, following a bout of pneumonia, came as a “direct result” of said injuries and Young is therefore facing manslaughter charges; Prosecutor Zahid Hussain quoted as saying (at the original trial):

“A post-mortem was conducted on January 29, 2011, and the conclusions from the pathologist are that the injuries inflicted upon the child in 1998 led directly to the death of the child.”

“There was a cause and effect role between the head injury sustained while Michael was a baby and his death at the age of 12.”

I imagine it will be a complex & prolonged trial; even the the thinking surrounding “shaken baby syndrome” has greatly evolved in recent years with one of its pioneers Dr. Norman Guthkelch challenging the classic triad (of cerebral oedema, subdural haematoma and retinal haemorrhages) and even raising great doubts about causality, recently publishing an article very critical of such prosecutions:

“I wouldn’t hang a cat on the evidence of shaking, as presented.”

In any subsequent appeals it seems highly likely that the judges’ directions (as they often are in such cases) will be subject to microscopic scrutiny as the defence look to break this chain and establish external/third party interventions in Michael Winn’s untimely death.

Most lawyers (including trainees) will be familiar with “hell or high water” clauses and most of us in moments of passion have suggested we would do something/get somewhere “come hell or high water” but in this case the literary association came from a much simpler space; just take one look at Allan Young’s photo as he makes his way to the Old Bailey and if you ever need a visual metaphor for “living hell” you have one. 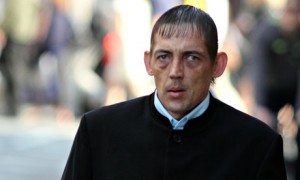 Honestly I don’t know where I stand on this case. Guilty of something 13 years ago; of course. Guilty of manslaughter 13 years later I think it’s a very hard call to make both medically and legally; in fact it is the tension between these two specialities that both fascinate me and will ultimately determine Young’s fate. I can be sure of one thing only: whatever the outcome I can’t imagine even justice will be able to extract much joy from this tragic and as yet incomplete tale.

John Morton; onetime Archbishop of Canterbury and ultimately Lord Chancellor under Henry VII was quoted as saying: “If the subject is seen to live frugally, tell him because he is clearly a money saver of great ability, he can afford to give generously to the King. If, however, the subject lives a life of great extravagance, tell him he, too, can afford to give largely, the proof of his opulence being evident in his expenditure.”